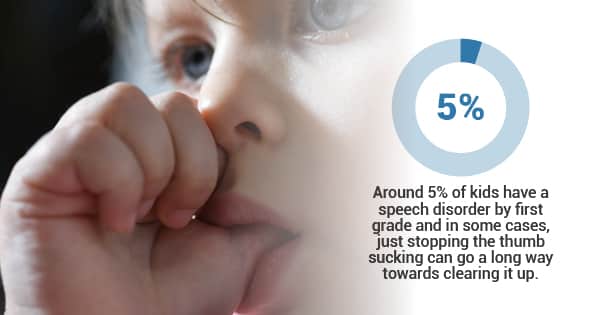 When Should My Child No Longer Suck His Thumb?

Most babies (about 95%) suck their thumb out of reflex. But after they turn two, it’s usually more from habit than reflex. After the ages of two or three, around 10% of kids keep sucking their thumb and around 5% do it after the ages of four or five. However, if your child is in the latter range and still sucking their thumb, the American Dental Association highly suggests discouraging this behavior. Age four is generally the best time to get your child to stop sucking his or her thumb.

Age four or five tends to be the cut off because permanent teeth can start coming in at that point. Thumb sucking beyond that point can lead to dental problems that require corrective measures to fix later on in life.

What are the Benefits to My Child No Longer Sucking Her Thumb?

The average person has over 3,000 bacteria on their hands and kids are notoriously germy. It’s one of the reasons colds and flu spread so fast in schools. Kids touch everything (including things that have been coughed or sneezed on) and then put those hands in their mouth. Thumb sucking means that your kid has extra exposure to these germs.

After their weight, teeth are Americans’ second biggest insecurity. Over four million people need braces or other cosmetic dental work done and thumbsucking can cause overbites or underbites, especially if it’s really ferocious thumb sucking. Over three quarter of kids who have an overbite or underbite have been helped by someone intervening early, so breaking them of this habit is immensely beneficial.

If you learn to talk around a thumb in your mouth, it’s likely that you’ll have some kind of speech impairment. And indeed, sucking your thumb has been shown to cause speech impairments, in many cases. Around 5% of kids have a speech disorder by first grade and in some cases, just stopping the thumb sucking can go a long way towards clearing it up.

How Do Thumb Sucking Guards Work?

This is effective because you won’t have to constantly tell your child to stop putting his or her thumb in their mouth (which might encourage them to do it, out of rebellion). Instead, you can let them do it, but because the same feeling isn’t there, they might stop of their own accord.

Most attach to a customizable wristband that keeps it secure and is comfortable and ventilated, so there’s no bad smells or discomfort.

The Facts And Fictions About Thumb Sucking: Part 1

4 Reasons Why Thumb Sucking Could Be Hurting Your Child