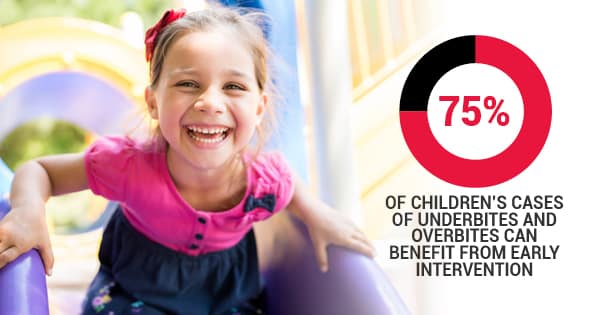 Thumb sucking is a common habit for many younger kids. This is because thumb sucking starts out as a reflex when children are infants.

Thumb sucking is also considered positive in the first few years of life because it exposes your child to weakened pathogens that boost their immune system. But after the age of four, the American Dental Association recommends discouraging your child from thumb sucking.

This is because the teeth start to come in by age five. When your child sucks their thumb on a regular basis it can damage their permanent teeth. It can also cause the permanent teeth to grow outward in an overbite.

What kind of issues can thumb sucking cause?
Although 75% of children’s cases of underbites and overbites can benefit from early intervention, thumb sucking can cause more than just issues with your child’s teeth. Thumb sucking after the age of four can also cause:

As previously mentioned, thumb sucking can help to boost a child’s immune system in their early years by exposing them to weakened allergens and pathogens. But once your child has reached school-age, they’re more likely to be exposed to viruses and harmful bacteria.

And because your child is putting their hands in their mouth after being in a school environment, it puts them at greater risk for coming down with these illnesses such as the common stomach bug, the flu, pink eye, and whooping cough.

Approximately 5% of children will still suck their thumb after they’re turned four or five. This behavior is not ideal.

Sick In The Sun: Common Summer Illnesses To Be On The Lookout For

Nail Biting Vs. Thumb Sucking: Which Is Worse For Your Child?